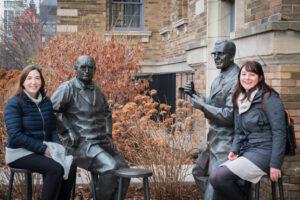 Since 2006, when the first insulin-expressing cells were produced in the lab from human pluripotent stem cells (hPSCs), people living with type 1 diabetes (T1D) have held out hope for new stem-cell derived treatments.

T1D is an incurable disease thought to develop when the immune system attacks and damages insulin-producing beta cells in the pancreas. Currently, insulin administration is the first line of treatment for T1D. Pancreas and islet transplantation (the latter being a group of cells, including the beta cells, that produce insulin) from human donors can be effective at rebooting the body’s ability to produce insulin and control glucose. However, the approach has a limited scope given the scarcity of donors and the need for lifetime immunosuppressant medications.

The good news is that clinical trials are underway to assess transplantation of encapsulated stem-cell derived pancreatic cells to replace lost beta cells and restore the pancreas’ ability to produce insulin to control blood glucose. The advantages of this approach are that hPSCs (which can develop into most cells found in the body) can be manufactured in sufficient quantity, and that encapsulation may allow the cells to avoid attack from the recipient’s immune system.

However, while anticipation is high for these experimental therapies, a lot remains to be understood about how the production of beta cells from hPSCs can be optimized. That is the focus of an OIRM New Ideas research team based at the McEwen Stem Cell Institute in Toronto.

“We want to better understand how the human pancreas develops, particularly during the stage when pancreatic islets are formed,” explains Dr. Maria Cristina Nostro, Senior Scientist at the McEwen Stem Cell Institute and a primary investigator on the OIRM grant (pictured left). “The rationale behind the study is to look at this in an unbiased fashion, studying the human developing pancreas at the single-cell level to get a better sense of which kind of cell types are involved during the formation of the islets, and to identify signaling pathways and interactions that are important for beta cell development.”

The study will have a special focus on the interaction between the developing pancreatic epithelium and immune cells, thanks to the collaboration with Dr. Gordon Keller, Director of the McEwen Stem Cell Institute, Dr. Nostro adds.

T1D is considered an autoimmune disorder, but what triggers the immune system to attack beta cells is not fully understood, notes co-investigator Dr. Adriana Migliorini, a postdoctoral research fellow at the McEwen Stem Cell Institute who holds an Advanced Postdoctoral Fellowship from the Juvenile Diabetes Research Foundation.

“There is always an underlying genetic component to developing T1D, but environmental factors early on in life might trigger the immune reaction leading to beta cells destruction,” Dr. Migliorini says.  “We want to get a clearer picture of how cells from different compartments in the body cross-talk with each other during pancreas development. We also want to identify those key cell populations that appear early on in islet development that may also help the survival and function of these cells when they are transplanted.”

Drs. Nostro and Migliorini note this research is possible thanks to OIRM’s investment in basic science via its New Ideas Grants program and support from the JDRF, which allows them to explore unique, unanswered questions in regenerative medicine (RM).

“It can be difficult to get funding for these types of studies, especially when we don’t have any preliminary data to rely on,” Dr. Nostro says. “Adriana came to our lab with this fantastic idea, and it’s huge for young investigators to obtain this level of support. Often, the focus in RM is on the creation of small and large biotech companies, but those success stories often start with big questions and adequate funding for basic research.”