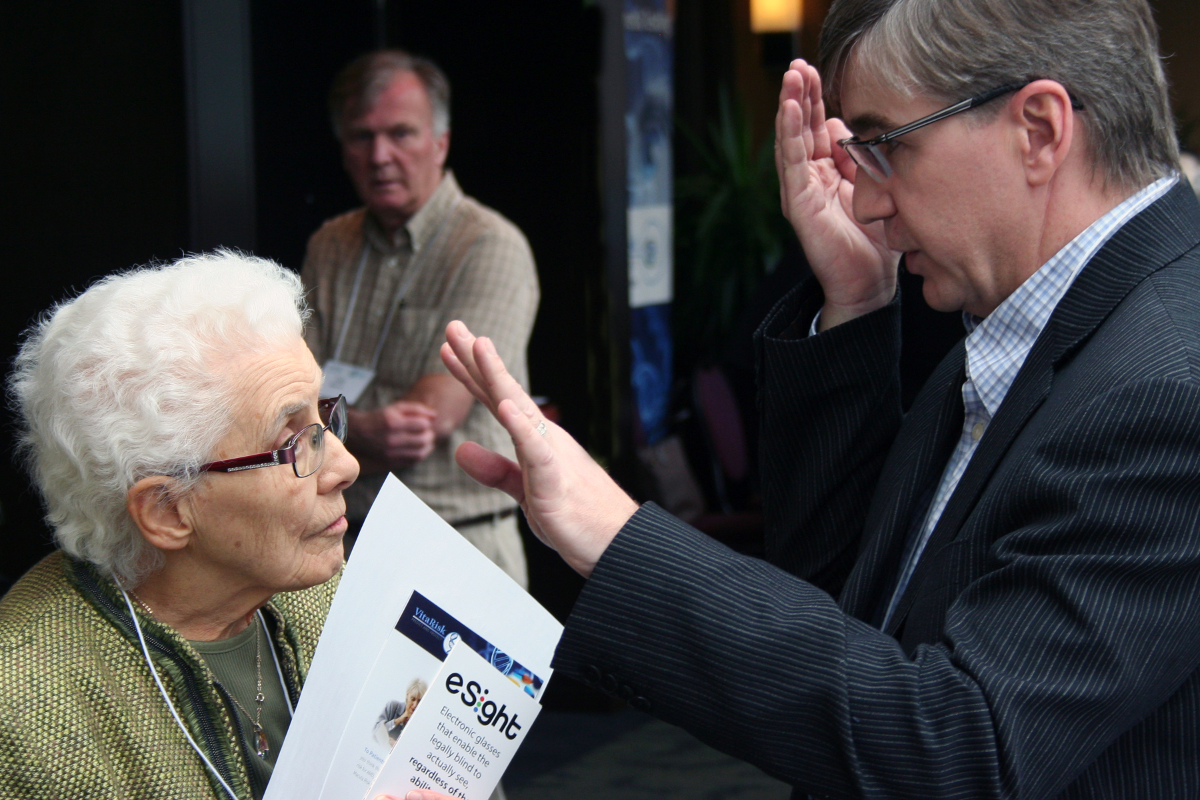 Most of us will never feel the kind of adoration reserved for celebrities or rock stars – especially if your daily job involves wearing a lab coat and working with tiny cells in a Petri dish. And yet, on October 17, a handful of researchers and clinicians attending Vision Quest, an event organized by Foundation Fighting Blindness (FFB), were treated to a standing ovation from an awed and inspired crowd of 400.

For many of the researchers present at the Toronto event, it was the first time they had direct interaction with patients. Sharon Colle, President and CEO of the FFB, relates the experience: “[The researchers] are meeting a fabulous young mom who has degenerative eye disease and she’s talking to them and it becomes personal.”

Making research personal is about making connections between all the players – patients, caregivers, researchers, clinicians, and the organizations that are striving to end disease. This is why researchers funded by Canadian health charities aren’t toiling away in their labs in isolation. Organizations like the FFB and the Multiple Sclerosis Society of Canada (MS Society) are putting researchers face to face with the people living with disease, for whom their toiling might benefit. Together they are planning the future with realistic possibilities of healing with regenerative medicine.

Healing, repairing or replacing diseased tissues, whether they are nerves, muscles or pancreatic cells, is the ultimate goal in disease research, which is why health charities and the patients they serve are excited about the progress being made with stem cells and regenerative medicine. In regenerative medicine, different diseases share strategies in common, such as the type of tissue in need of repair or the way to deliver therapies. As a result, there is a lot to be gained through collaboration.

The Ontario Institute for Regenerative Medicine (OIRM) held a forum in June 2015 to bring Ontario’s health charities together to share their research directions in stem cell and regenerative medicine. Sharon Colle appreciates the role OIRM is playing in facilitating group projects between the health charities, “OIRM is playing a key role in building these collaborative partnerships and making them accessible to health charities,” she says. The many points of alignment between organizations such as the FFB and OIRM is one reason why OIRM is planning further events like the June forum – the next one being a focus group to discuss clinical trials and the phenomenon of stem cell tourism, to be held on November 25.

Similarly, Dr. Karen Lee, Vice President of Research at the MS Society sees the benefits of health charities and other research organizations joining forces. “I think by working together we can really push the agenda forward to ensure that we not only broaden the area of stem cell research but increase the understanding of their potential and ensure that we are advocating for a proper standard of care related to stem cells in the future,” says Dr. Lee.

Dr. Lee and the MS Society are excited that research they have supported, in testing the ability of mesenchymal stem cells to reduce inflammation and stimulate nerve repair, is now in clinical trial. The trial is being led by OIRM researcher, Dr. Mark Freedman (Ottawa Hospital Research Institute/University of Ottawa) and Dr. James Marriot (University of Manitoba), and also involves OIRM researcher Dr. Harry Atkins at the Ottawa Hospital Research Institute. Results from the Mesenchymal Stem Cell Therapy Trial, where Canadian MS patients are treated with mesenchymal stem cells taken from their own bone marrow, are expected within about 2-3 years.

The FFB is funding many regenerative medicine projects in Ontario and across Canada.  A project that aims to restore sight to individuals with Age Related Macular Degeneration by using stem cells to generate cone cells for transplant into the eye is jointly funded by the FFB, OIRM, McEwen Centre for Regenerative Medicine and the Centre for Commercialization of Regenerative Medicine. Lead researcher Dr. Valerie Wallace is at Toronto Western Research Institute. Colle says partnerships like this are the future of research. “We know that we can’t do it alone anymore because the costs of research, and particularly the costs as we move towards the clinic have become incrementally more than we can certainly afford but we also know the power of partnerships and collaborations and so that’s our focus as we move forward.”

The FFB was founded 40 years ago at a time when almost nothing was known about genetic eye diseases. Colle says, “We had to build the community of researchers, scientist and clinician researchers in Canada that didn’t even exist at that time. And so we started funding basic science but we are really now very happy that we’re moving along the pipeline in getting therapies towards the clinic.”

Both the MS Society and the FFB put a lot of effort into patient education and engagement. The MS Society held a research priority discussion a few years ago that brought researchers and people living with MS together at round tables across Canada to ensure that priorities were aligned. Dr. Lee herself researched MS in the lab before ever meeting anyone living with MS and says that researchers can bogged down with details like how does this protein function but forget that you are doing this for a person living with MS. “By that engagement they got to see what it’s really like to live with MS and the importance of the person who lives with MS. At the same time it allows the person living with MS to understand why potentially research takes a little longer”, says Dr. Lee.

The FFB holds the educational series Vision Quest, like the one in Toronto last month, where researchers, clinicians and patients are all invited. Not only are these researchers challenged by explaining their research without the jargon, but there’s an added twist – they have to give their presentations without slides out of respect for the visually impaired people in the audience. Colle says she’s had researchers start their presentation by saying how terrified they are without slides but it makes people better communicators. She recalls the presentation of Dr. Derek van der Kooy, who is part of Dr. Wallace’s team of researchers funded by a partnership between FFB and OIRM. “He had every person in the audience turn and look into each other’s eyes and then describe the eye, where adult retinal stem cell lay in the eye and that becomes very meaningful engagement.”

There is a synergy between health charities, researchers and patients. Colle says the scientists, clinicians, patients and families inspire her every day. “They help me and the people around me, our board of directors and our volunteers and our staff. They help us imagine where we will be standing 10 years from now.”