Inspirations and aspirations of a stem cell researcher

Khalili initially pursued a career in medical research — immunology to be precise — for the same reason many do: to improve the lives of those suffering from disease. It was during his master’s degree in Iran that things got a lot more personal. His father, a diabetic, began to lose his vision due to age-related macular degeneration (AMD), a deterioration of the central region of the retina called the macula that allows us to see details, like printed words on a page and to recognize faces. Diabetes exacerbated his condition due to the complication diabetic retinopathy that affects blood vessels in the retina. It was this diagnosis that steered Khalili into retinal stem cell research. 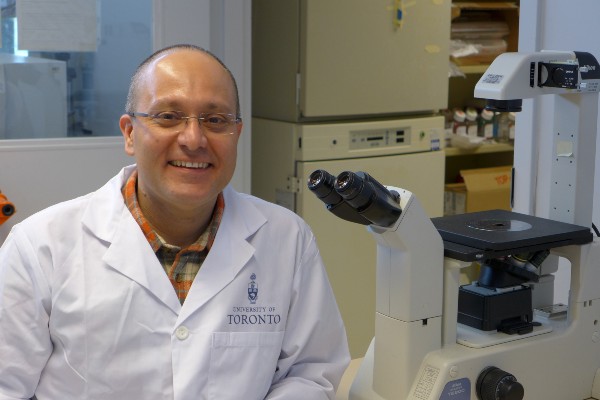 “When my father was diagnosed, it was the beginning of my interest in stem cells and it carried me all the way to Canada and to McGill University and now to the van der Kooy lab,” says Khalili.
Khalili appreciates his prestigious location at University of Toronto. Just down the street, the first evidence of stem cells emerged in the early 1960s, a discovery that would define the entire field. And, a little over a decade ago Dr. Derek van der Kooy, Khalili’s postdoc supervisor, discovered adult stem cells in the retina that hold promise for restoring sight.

We can’t see retinal stem cells with the naked eye, but we can see where they reside, right at the thin black edge between the white and coloured part of the eye. Here in the eye these stem cells are not active and do not regenerate tissue, but when they are isolated and grown in culture they can turn into any of the retinal cell types.

In AMD, degeneration of light-sensing cone photoreceptors in the macula causes central vision loss. Cone photoreceptors can be derived from retinal stem cells in culture and Khalili hopes in the future they will be transplanted into the eyes of patients who have lost cone function due to AMD and retinitis pigmentosa.

For this to be realistic researchers need to be able to make enough cone photoreceptors for clinical purposes. They also need to be sure these cultured cones really are like the ones found in the eye so they will function and be safe to transplant them into an eye. Khalili isolates mouse retinal stem cells and is optimizing growth conditions for making cone photoreceptors. “So far we are able to enrich cone photoreceptors and 60 per cent of these express all the cone characteristic markers,” says Khalili.

All cells have the same genes, but what makes cells look and behave differently is how they express those genes. When a gene is “on” it makes RNA and subsequently protein and certain RNAs and proteins are markers for cones. When Khalili makes cones in culture, they might look like cones on the outside but to be sure, he uses his favourite lab technique — RNA sequencing — to get a snapshot of gene expression. “It tells me the character of the cell. When RNA sequencing is finished I can tell what the cell looks like internally.”

The team is testing whether their cones can integrate into the retina of blind mice and make them see. Khalili envisions clinical trials in the not too distant future and says the next steps are to scale up production of cone production using a bioreactor and test in a larger animal. Right now human retinal stem cells for research are coming from the Eye Bank of Canada. For future treatments a surgeon might take a tiny piece of a patient’s retina, proliferate the retinal stem cells, make photoreceptors and put them back in that patient’s eyes.

Through the Foundation Fighting Blindness, Khalili has met other people like his father, whose quality of life suffers due to vision loss. He’s had the opportunity to tell them about his research and to share his enthusiasm about the ability of stem cells to one day cure blindness. While he says it’s challenging to tell patients that it’s not there yet, Khalili also finds it very motivating. “It encouraged me to really work harder and faster and smarter and to collaborate with other scientists to come up with a tangible cure,” he says.

Doing all that won’t be easy but the life of a researcher suits him well. “Every day is a challenge but it’s a nice challenge that you wish to face,” says Khalili. Those daily challenges turn into small successes that may not impact patients yet, but they do impact the scientific field and keep it moving forward.