Home / News and Events / Muscling in on a Devasting Disease

Muscling in on a Devasting Disease 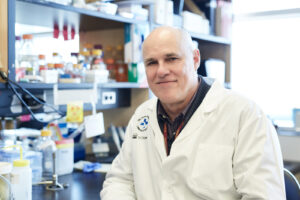 For too many parents it is the same story – the joys of having a baby, settling into the routine of raising a young boy, celebrating early milestones as they grow, and making plans for the years to come. Then, somewhere between age three and six, perhaps, the first signs appear that something is wrong. Delays in learning to walk. Clumsiness. Difficulty standing up. Weakness in the arms or legs. Then comes the diagnosis, and an uncertain future.

Duchenne muscular dystrophy (DMD) is a genetic disorder that affects roughly one in every 1,300 boys worldwide. Its hallmark is progressive muscle wasting and weakness that eventually leads to fatal heart and breathing complications. Most boys with DMD develop muscle weakness by early childhood, and life-threatening complications by their early teens. Many will also require a wheelchair in their teens. There is no cure, and life expectancy with supportive therapy such as ventilation for assisted breathing is between 21 and 39 years in published studies, and only 14 to 27 without.

Now, a multidisciplinary OIRM-funded Disease Team is working to paint a rosier future for boys and young men living with DND. Led by Dr. Michael Rudnicki, Director of the Regenerative Medicine Program and the Sprott Centre for Stem Cell Research at the Ottawa Hospital Research Institute (OHRI), the team is on the hunt for innovative ways to improve both physical mobility and quality of life in DMD by stimulating skeletal muscle regeneration using small-molecule drugs (most prescription medications fall into this category).

“It’s is an extremely complicated disease – there are a lot of things going on in DMD that we need to understand in order to treat it effectively,” explains Dr. Rudnicki, who is also a professor at the University of Ottawa. “Over the past few years, there has been a lot of interest in the potential for gene therapy using adenoviruses to deliver microdystrophin to produce functional dystrophin proteins, and in exon-skipping therapies to restore some function to the DMD gene. However, these therapies have yet to prove clinically useful.”

DMD is caused by mutations in the DMD gene, which is responsible for the production of dystrophin, a protein found in muscle cells important for strengthening fibres and preventing injury as muscles are contracted and relaxed. It is found in skeletal and heart muscle, and in smaller quantities in the brain. Impaired dystrophin levels result in muscle cells being replaced by fat and scar tissue, and the subsequent muscle weakness seen in DMD.

“We’ve shown that dystrophin has a role to play in stem cell function, and that without dystrophin in muscle stem cells we see impaired levels of muscle repair,” Dr. Rudnicki says. “Our data make a strong a case that this is a major contributor to disease progression and needs to be addressed. Our work to rescue this stem cell deficit in DMD and effectively promote muscle repair is moving forward quite aggressively, and we’re very hopeful that, by addressing the repair deficit, we can have a significant effect on ameliorating the progression of DMD.”

Dr. Rudnicki adds that, if progress continues at the current rate, clinical trials in humans could start in as little as two years. Ultimately, a clinical treatment may take the form of a single therapy, or one used in combination with other treatments such as gene correction.

“We are excited by the possibilities, but solving complex problems like DMD will require continued, meaningful investment by the public sector at the provincial and federal levels, by nonprofits such as OIRM and the Stem Cell Network, and of course by industry,” Dr. Rudnicki concludes. “All of these pieces are necessary to really accelerate the research through the translational pipeline, and having all relevant partners at the table is such important piece for making this happen.”