Ontario is a mover and shaker in the Canadian and global regenerative medicine markets, leveraging modest government investment into a thriving research and commercialization ecosystem. That was the message the Ontario Institute for Regenerative Medicine (OIRM) and Octane Biotech delivered to Minister of Colleges and Universities Jill Dunlop during a recent tour of Octane’s Kingston facilities.

Minister Dunlop heard that a $25 million investment from the Government of Ontario’s over the past five years empowered OIRM to attract $174 million in leveraged funding. That funding attracted over $330 million in Series A financing for six company spinoffs that have created more than 300 private sector jobs to date. At the same time, the number of clinical trials for experimental cell therapies grew from 5 to 22 across a broad spectrum of diseases.

“It’s important for government to understand how much OIRM and its partners have achieved for the people of Ontario in terms of creating new cell-based therapies to treat serious diseases and drive economic recovery in the province,” Donaldson explains. “More than $1 billion has been invested in Canada’s RM market over the past 15 years, and more than 50% of that was in Ontario, where nearly 75% of the country’s RM companies reside. That says a lot about what we’re doing here, and why continued government investment is critical – it acts as a catalyst for leveraged funding from both the public and private sector.” 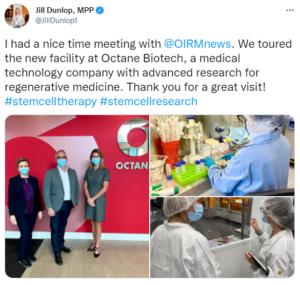