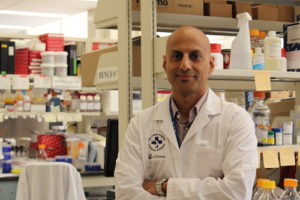 Every day, we see headlines in the news touting the latest study that has shown great promise in the lab. Yet only an estimated one in 20 of these projects will result in a treatment that is safe and effective in humans. There are many reasons for this. Sometimes, it is because it is only an early step in the long process of developing a drug or treatment, and sometimes it is because of what is known as “reproduction failure,” when what one scientist can do in the lab cannot be replicated by other scientists.

This is not to say the science isn’t strong – it has much more to do with the complexity of the problems being tackled and the intricacies of any possible solution. It is similar to when a new drug is being tested. While it may work very well in the lab or in a small sub-set of people, possible adverse effects may not be apparent until the drug is tested on a much larger population—and those adverse effects may be completely different than originally considered.

The problem of replication got Dr. Manoj Lalu and his team at Ottawa Hospital Research Institute wondering if there was a way to better determine efficacy in research before entering into costly clinical trials. Their 2018 OIRM New Ideas Grant has given them the opportunity to start testing the theory that multi-centre preclinical trials might solve this problem.

“Typically, what happens in basic science is that one laboratory finds this remarkable result and then they start to try and move that into clinic right away,” Lalu explains. “What we have seen in some therapies that have failed, is that as they move towards translating that therapy, other people tried to repeat what they’d done in the lab and they haven’t been able to get as remarkable results, for whatever reason.”

His team looked at this and thought it might be much more effective to test the reproducibility of a therapy first, before moving into clinical trials. Robust protocols for cell therapies are essential, especially when they are being scaled-up to multicentre trials or large numbers of patients. Lalu’s team hypothesized that this new process, which moves away from one scientist working in isolation, to a much larger team approach, could be a very helpful step in getting more treatments to patients.

This isn’t a new idea, but when Lalu looked into it he and his team could only find 12 multicentre pre-clinical trials. The first one took place in the 1980s and then another in the 1990s, but the majority had been after 2010, as the idea that multi-centre preclinical trials could provide great value started to take root. Lalu and his team are now working on the first ever preclinical trial for stem cell treatment. The hope is that by doing this upfront work, they can determine whether moving into a clinical trial is worthwhile.

“It’s a higher cost up-front because you’re repeating the study over multiple different labs” he says, “But we might find that this just doesn’t work that well in the lab, so we probably shouldn’t try to put this into patients. Not only is there cost savings then but there’s potentially also benefits to patients in not being subjected to a clinical trial which has less chance of working.”

For Lalu and his team, the idea that this type of project could lead to an increase in the number of therapies that actually move into clinic drives their work. “I think what’s been most satisfying is actually helping investigators start to create a clinical trial protocol and, even at this point, start to move them into patient trials. Helping them build these trial protocols, helping them to move from bench to bedside, that’s one of the big areas that is under-studied and misunderstood or underappreciated,” he says.