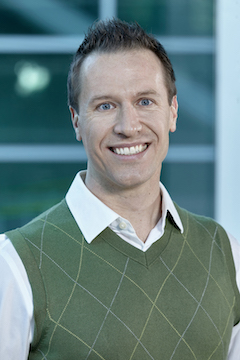 When Jon Schertzer, PhD, talks about the role of regenerative medicine in his work, he likes to explain how he has come full circle. Starting his career studying kinesiology, Schertzer, now an associate professor of biochemistry and biomedical sciences at McMaster University, was interested in exercise and how it changes the body. He did his PhD on the regenerative capacity of skeletal muscle and what goes wrong in muscular dystrophy, focusing on ways to tweak genes or use endocrine factors to make muscle grow better. Endocrine factors, are the hormones produced by glands such as the pancreas that carry these hormones into the circulatory system.  That work led to his interest in insulin-like growth factors and the metabolic effects of endocrine factors that drives his current work in diabetes and preventing infection for those living with the disease.

“I got very interested in how inflammation stops these endocrine factors from working,” he says. “What are the triggers for inflammation in our bodies, how does that stop insulin from working, what is the response of insulin and how is it managed during inflammation? That’s brought me all the way to studying the microbiome or the microbiota which are the bacteria that live on us. What we’re learning now is that the response of the gut to both food and the diabetic environment modifies the cells in the gut to be able to respond to an infection, to form a barrier and diabetes modifies this and the regenerative capacity of the gut that can be changed in diabetes.”

The idea that gut bacteria can play a role in the development of disease is still a relatively new area of study. While researchers have been able to identify which bacteria are present, Schertzer’s lab is focused on what they do, basically ascribing function to the bacteria. “We crack the bacteria apart, to look at their very simple components – some promote insulin resistance or prediabetes, some actually combat prediabetes. That was a recent research discovery in the lab, that bacteria are not all bad, they have parts to them that can be insulin sensitizing that can combat prediabetes. And we’re trying to bring some sanity to this area of probiotics, prebiotics and what they actually do, based on scientific evidence of the understanding of the way that bacteria change metabolism.”

Schertzer is not necessarily looking for biomarkers or a way to tell if someone is predisposed to type 2 diabetes because of their gut bacteria. For him, the science he does has a much broader focus, but also a very important aim.  “We’re trying to understand the basic mechanisms so clinician scientists can pick up this work and the aspects that are reproducible in humans can be followed up on. When we choose the variables we’re going to study, we try to choose the ones that are going to be meaningful to patients. For the regenerative aspect, because it’s well-known that people with diabetes have increased risk of infection and severity of infection, then understanding how this occurs can change how the infection is managed when it’s identified and then potentially drive new therapies to improve the outcomes from infection.”