Stem cells as the road to repairing Multiple Sclerosis

A clinical trial set to begin this month in Ottawa will test the safety and efficacy of mesenchymal stem cells to stimulate repair of damaged nerves in MS patients. This article was published simultaneously on Signals Blog. 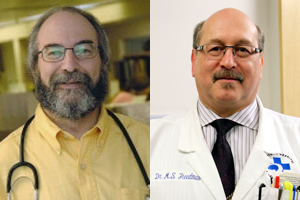 On any given day at the general campus of The Ottawa Hospital, you’re likely to find a pair of clinician-researchers who possess a keener knowledge of stem cells and their potential as a treatment for Multiple Sclerosis than just about anyone else in the country. Nearly 15 years ago, Drs. Mark Freedman and Harry Atkins, both members of the Ontario Institute for Regenerative Medicine, began work on a protocol that was intended to track the origins of MS by wiping out the patient’s compromised immune system (immunoablation) and rebooting it with a bone marrow (hematopoietic) stem cell transplant. The theory was that the disease would reassert itself and the researchers would be able to identify the earliest stages of MS, something largely unknown, due to the fact that most diagnoses of the disease occur years after initial onset. This knowledge could prove to be vital for Canadians, who have the highest incidence of MS in the world at 291 cases per 100,000.

The study, however, didn’t work — at least, not as expected. Drs. Freedman and Atkins were unable to discover the origins of MS because not a single patient in the study redeveloped the disease. For some, the level of physical function after treatment stayed the same, a bare few deteriorated further, some saw marginal or moderate functional improvement, and, remarkably, some regained almost all the physical abilities they had before diagnosis – but, no matter what their functional improvement, the disease was gone. These surprising results forced Dr. Freedman, a neurologist, to wonder if there could be other ways to use stem cells to treat MS that were less risky for the patient – one that did not involve aggressive immunoablation or chemotherapy treatments.

Enter the mesenchymal stem cell. Mesenchymal stem cells, or MSCs in research parlance, are a bit of a stem cell anomaly. MSCs defy a standard definition – they’re also known as marrow stromal cells and multipotent stromal cells – and they’re rather like a stem cell free agent, able to travel to just about any organ in the body. They’ve been found in bone marrow, dental pulp, muscle, fat, as well as the liver and the lungs and many other tissues. Exactly what they do remains a bit of a mystery; it’s known that they play a critical role in reducing and controlling inflammation, but they also appear to have the ability to stimulate repair as well.

It’s this two-fold ability that makes MSCs quite powerful, attracting the interest of researchers who are studying a vast array of conditions, such as heart disease, stroke and autoimmune disorders – including Multiple Sclerosis.

“If MSCs have this kind of regulatory effect, we wondered whether we could use them for ‘one-stop-shopping’; that is, to see if they could control inflammation and, at the same time, stimulate repair of the nervous system,” said Dr. Freedman.

MS is an inflammatory disease in which the body’s immune system attacks the central nervous system. The inflammation leads to injury of the myelin sheath, which serves as insulation for the nerves. Once this happens, the oligodendrocytes (cells that make the myelin) fade away, and the nerve fibres retract, leaving the brain unable to effectively communicate with the limbs and organs. Dr. Freedman likens it to a road system, where the highways are the nervous system transporting signals back and forth. The myelin-rich oligodendrocytes are the tarmac on the road; when it wears down the road becomes bumpy and we fix it. “In MS, the inflammation prevents repair crews from working and eventually, the road becomes impassable – or in this case, the signals can no longer transmit across the nerves,” he said.

“We believe the body already has the cells in place that could do repair work on our nervous system but perhaps they didn’t get the message to begin repair. They might just be on coffee break.” If this is the case, MSCs, with their anti-inflammatory and repair functions, could be enlisted as a job foreman, able to tell the body’s worker cells that break time is over, and it’s time to get to work.

Drs. Freedman and his colleagues began designing a new study using MSCs to do just that. Unlike the earlier work, this new study would not require the destruction of the immune system or chemotherapy. Instead, MSCs would be harvested from the patient’s bone marrow, grown and expanded in the lab and then transplanted back into the patient intravenously.

“Our real desire in this first trial,” said Dr. Atkins, a haematologist who will be leading the collection of bone marrow tissue from the patients, “is feasibility and safety. We want to see if there is any evidence of a biological response – either in control of the immune system, or in repair of brain tissue — that we can attribute to the MSCs. Beyond that, we also want to see how we can test the effects of the treatment, since at this point, very little is known about if and how the MSCs might work. We’re really at the beginning of this journey.”

The trial, called MESCAMS (MEsenchymal Stem cell therapy for CAnadian MS patients), is a randomized, double-blind, placebo-controlled crossover study, meaning that patients will all receive both the MSCs and a placebo in the two six-month phases of their treatment, though they will not know whether they have received the stem cells in the first round or in the second. Those who receive the MSCs in the first round will then receive the placebo in the second, and vice versa. The research team will monitor each participant’s responses to both the MSCs and the placebo, in order determine the effect of both on inflammation and repair. Should the MSCs show a biological effect at the end of the study, the results will help determine the course of a phase III trial to better define and understand efficacy and treatment protocols in the future.

The trial is part of a larger, coordinated international study where protocols for production, transplant and patient inclusion are being matched as closely as possible. In total, between 160 and 200 patients will participate – as many as 40 in the two Canadian centres, Ottawa and Winnipeg.

The limiting factor in the number of patients that can be enrolled is not eligible patients; rather, it’s the ability to purify and grow the required number of cells, something that can only be done in specialized facilities.  Only a handful exist in Canada — one in Ottawa and one soon to be online in Winnipeg. Even with close access to the facilities, the cells themselves take approximately six weeks to be cultured and prepared for transplant back into the patient.

The first trial participant will be enrolled this month and is expected to begin treatment in August.