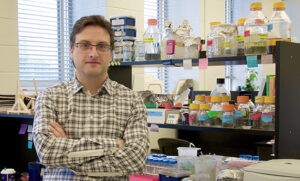 Congenital muscle diseases (CMDs) such as muscular dystrophy are considered rare in their own right – there are hundreds of subtypes – but taken together, they affect more than 50,000 Canadians. Progressive muscle wasting is the hallmark of these conditions, leading to impaired movement and balance, persistent pain and difficulties with breathing and swallowing. Many CMDs result in significantly reduced quality of life and shortened life expectancy.

Adding to the physical burden, CMDs can also negatively affect normal brain development (neurogenesis) during infancy, resulting in learning, memory and behavioural deficits. This is because movement is an integral part of neurogenesis and growth of the forebrain, the most powerful data processing centre in the brain. It’s responsible for processing both cognitive and voluntary motor functions, among other important tasks.

After we are born, our brains begin to process sensory experience as we move through our environment (sensorimotor input), fueling critical forebrain growth (neurogenesis) during early life. The phenomenon is a two-way street – it has also shown that restrictions in movement hinder it, resulting in impaired brain growth and function.

It begs the question: Could improvements in the development of the forebrain be achieved in people born with a CMD by providing sensorimotor input in other ways?

“I think it’s a super exciting question from a neurobiological standpoint, to understand how sensorimotor experience can influence the brain,” he says. “In preterm infants, for example, we know that interventional therapies (including physiotherapy) improve cognitive and motor outcomes, and that’s in line with our hypothesis that sensorimotor feedback leads to improvements in brain development. There’s not much we can do for CMD patients with brain development problems today in terms of treatment, so we are fascinated with the downstream potential of this research to create ways of stimulating peripheral neurons into the treatment process and promote brain growth.”

In 2018, Dr. Tropepe and colleagues published results from a study utilizing zebrafish larvae that confirmed a relationship between movement and brain development – restrained larvae produced fewer of the progenitor cells that differentiate into brain cells, while more frequent movement against water current led to an increase in progenitor cell production. As well, when the development of sensory cells (which sense and interpret information such as touch, smell, temperature and other inputs from our environment) was blocked, so too was the production of progenitor cells in larvae exposed to increased movement. Conversely, activation of the sensory cells of larvae that weren’t free to move nonetheless increased the number of progenitor cells.

Next, they assessed whether dorsal root ganglia (DRG) – groups of neurons near the spinal cord that transmit sensory input from nerves throughout the body to the central nervous system for a response – are necessary for movement-dependent neurogenesis. First, they eliminated the development of DRG neurons using a drug inhibitor that prevents their normal differentiation during development, resulting in zebrafish larvae that developed to normal size but with fewer DRG neurons. These fish exhibited less brain growth even though they moved as much as animals in a control group. Then, they tested the opposite approach using photopharmacology – bathing the fish in a drug that stimulates sensory neurons when a light is shone on regions of interest. Fish bathed in the drug/light but immobilized in a gel so they could not move showed an increase in neurogenesis, as if they had been able to move.

“So, our story at the moment is that sensory motor experience really does have a direct impact on brain growth,” Dr. Tropepe explains. “We think this happens via the DRG neurons, but of course it has to get to the brain, and it has to be processed in the brain somehow – we don’t quite yet know how.”

Dr. Tropepe notes that applying his findings to create new therapies for CMD patients is a long way off but stresses the importance of the basic science research community being supported to ask bold new questions in regenerative medicine.

In many ways, he says, securing funding for preliminary research can feel a bit like his zebrafish swimming against the current.

“A lot of research funding in Canada is targeted toward later-stage research, but in Ontario with OIRM we are in a unique position to push the limits of stem cell biology and regenerative medicine and look at things that no one has thought about before,” he concludes. “It may not lead to new therapies, but we won’t know unless we open that first door and see where it leads.”