Thinking Out of the Big-Box for Cancer Treatment 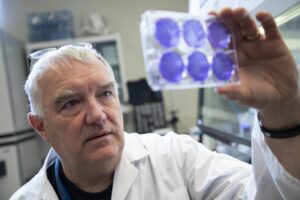 That nearly 700 clinical trials are under way around the world to assess chimeric antigen receptor modified T cell (CAR T) therapy for cancer treatment reveals something about the level of excitement and hope the scientific community has for the approach.

CAR T involves extracting a patient’s own T-cells (a critical component of the immune system tasked with destroying infected host cells), genetically modifying them using disarmed viruses to produce receptors that can latch onto proteins found on certain types of tumour cells, and reintroducing them into the patient. Since CAR T-cells were first demonstrated to kill prostate cancer cells in the lab in 2002, studies have shown that the therapy is effective against several cancers, especially in patients for whom standard treatments have failed. Health Canada has approved two CAR T therapies to date, but much work remains to be done in terms of managing potential side-effects, understanding and improving long-term efficacy, and reducing long turnaround times and significant costs associated with delivering the treatment.

Driven by significant technological resources and expertise required to manufacture and deliver CAR T, it’s difficult to overstate the degree to which cost is a barrier to wider implementation. Treating a single patient can run into several hundreds of thousands of dollars, putting the therapies out of reach for common use within most health systems. The significant infrastructure required has also resulted in relatively few CAR T clinical trials being conducted in Canada.

Enter BioCanRx, a federally funded research network based in Ottawa focusing on the development, manufacturing and clinical testing of new immunotherapies for cancer, including CAR T. One of the network’s goals is to build Canada’s capacity to perform research and develop new approaches to provide CAR T treatments to Canadians by creating a network of point-of-care cell manufacturing facilities in major centres, beginning recently with Victoria, BC. According to BioCanRx Scientific Director Dr. John Bell, point-of-care manufacturing offers several advantages over centralized models

“When we started to think about how to solve the CAR T cost problem we asked, ‘what’s really driving the costs?’” Dr. Bell, who is also senior scientist for the Cancer Therapeutics Program at The Ottawa Hospital Research Institute and professor at the University of Ottawa, explains. “We felt that if centralized manufacturing facilities cost a lot of money, which drives up the price of treatment, then maybe it’s the wrong the approach.”

The BioCanRx team assessed how other cell-based products are produced and delivered and noted how bone marrow transplantation for certain cancer patients has long been successfully performed as a point-of-care procedure. Specialized technology made standardizing bone marrow products possible no matter where patients and practitioners are located, and also made the approach acceptable to health regulators.

“We know bone marrow transplantation is life-saving and not cost prohibitive, and CAR T therapy uses a very similar approach,” Dr. Bell says. “CAR T adds a genetic engineering step, but that’s really not a huge cost driver. Biotech companies now make suitable self-contained technologies that are sort of like high-tech automated bread makers – put the cells in one end, and the product or treatment comes out the other, which reduces the potential for human error and is generally thought to be well standardized between machines. So, we thought why not take a noncentralized approach for CAR T manufacturing, too?”

Just four years after BioCanRx and partners including the BC Cancer Foundation and the Ontario Institute for Cancer Research set out to establish a viable Canadian CAR T program, its first point-of-care manufacturing facility is now open in Victoria. The network plans to expand to tertiary care centres in Ottawa, Toronto, Winnipeg and others in the near future.

“We have seen with the point-of-care bone marrow transplantation model that, once you have advanced infrastructure and talent in place, you see more creativity among the clinician-scientists working in that centre,” Dr. Bell concludes. “So, we envision that we will start to vigorously catalyze more research into CAR T approaches in Canada, which will also help drive down costs and increase the speed of development.”

For more information on ongoing BioCanRx clinical trials and other types of research, go to www.biocanrx.com.