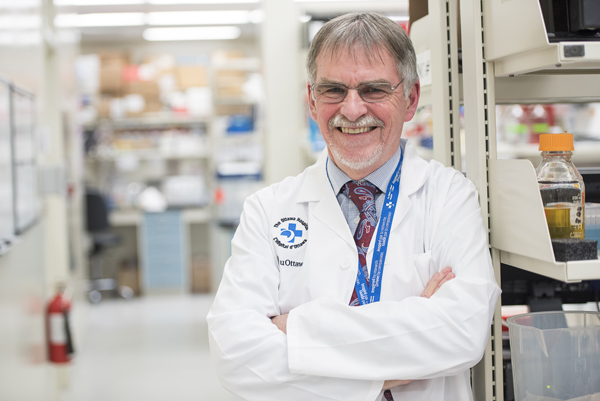 In small measures, inflammation is a good thing. When you have a sliver, swelling and redness show your immune system is working; that blood vessels have become wider and more permeable, allowing white blood cells to get out and fight pathogens. But there are no small measures in sepsis — instead of localized inflammation, pathogens in the blood pull a fire alarm, eliciting a whole-body inflammatory response. The result can be collateral damage to blood vessels and tissues, a condition known as septic shock.
Septic shock is a severe and life-threatening illness. Patients have leaky blood vessels and damage to vital organs caused by their overactive immune system. It is one of the most common reasons patients go to the intensive care unit (ICU) and mortality rates are dismal, as high as 40-50%, as ICU teams struggle to support patients’ failing organs and return them to working order.
When a patient with signs of septic shock comes through the doors of The Ottawa Hospital, the clock starts ticking. In addition to receiving all modern ICU therapies, they could be a candidate for an experimental treatment to receive specialized stem cells that will tell their immune system to calm down and tell other cells to begin repairing the damage. Now in phase I clinical trials, Cellular Immunotherapy for Septic Shock (CISS; pronounced like kiss) was first incubated in the lab of Dr. Duncan Stewart, Executive Vice-President of Research and senior scientist at The Ottawa Hospital, and member of the Ontario Institute for Regenerative Medicine (OIRM). An OIRM disease team grant is allowing Dr. Stewart and his team, including trial leader Dr. Lauralyn McIntyre, who is an intensivist and senior scientist at The Ottawa Hospital, to further guide this therapy along the translational path.
The therapeutic cells are called mesenchymal stromal cells or mesenchymal stem cells (both referred to as MSCs). Normally when we think of stem cell therapies we think about long term diseases but with septic shock the time frame is much different – patients must be treated within hours.

While the short time frame for treatment is a challenge, there is an upside according to Stewart, who is also a professor at the University of Ottawa. “Some of these acute diseases may be lower hanging fruit because you don’t need to have permanent engraftment of cells, you don’t need to have the cells working for long periods of time. If you were able to get the desired effect for a period of hours or days at a time when the injury was occurring you could have long lasting effects because you get the patient over that acute crisis.” Stewart explains that it is not their ability to transform into different cell types that is most relevant for septic shock, rather, “their most impressive or most relevant activity is that they have an immune modulatory effect. It is increasingly being appreciated how potent that actually is.”

The CISS team is on standby day or night to prepare those cells for delivery for patients enrolled in the trial. MSCs in other clinical studies have been injected right after thawing, but Stewart says this is not ideal because only about half the cells are alive. To avoid including dead cell debris and chemical contaminants from the cryopreservation, the CISS team cultures MSCs continuously, ensuring cells are always fresh and optimal.
The continuous cultures of MSCs require staff, reagents and equipment that won’t be practical if CISS becomes a standard treatment in the future. Stewart says this is where the OIRM funding will help. The disease team grant supports the further refinement of the process of cell manufacture and delivery in preparation for phase II and III clinical trials.
“What we need to move this forward is to really develop a procedure that would allow us to store the cells and that might be a form of cryopreservation or might be some other form of hibernation. We are working on different possibilities that will allow us to recover those cells within a period of hours consistent with the window we have to treat the patients,” says Stewart.
For the CISS trial, patients receive bone marrow-derived MSCs from healthy donors stored in a master cell bank. Unlike for other diseases where MSCs are being tested, like Multiple Sclerosis, there is no time to collect the patient’s own MSCs. So it’s a good thing that MSCs seem to fly under the radar of the immune system and are universally accepted by patients. In the future if these MSC treatments become standard, MSCs might be collected, banked and available in hospitals like blood is today.
As a cardiologist, Stewart didn’t normally encounter sepsis in his practice. Stewart says he followed his vascular research to the lung since “the lung is the most vascular organ of the body”. While researching potential treatments for diseases of lung vasculature, Stewart’s team identified approaches, like MSCs, that might help where the blood vessels are leaky. The best model for testing these potential treatments was the systemic sepsis mouse model. “The MSCs had a dramatic effect not only in the lung but in the other organs and the vasculature in the systemic sepsis models. The cells also had other important effects on bacterial clearance, which got us excited about the potential for this as a therapy for sepsis.” says Stewart.
Following the science often leads researchers like Stewart into unexpected territories, which is why OIRM grants and researcher networks are important. To build a team to move the project to the clinic Stewart knew “we really needed to have a card-carrying intensivist who would be interested in carrying the baton.” Critical care physician-scientist and fellow OIRM member Dr. Lauralyn McIntyre had a lot of experience doing clinical trials with patients with septic shock. When Stewart first moved to Ottawa he discussed his sepsis mouse research with McIntyre, and she now leads the clinical development to study MSCs in human sepsis patients. “This idea was really exciting because it was novel and had never yet been studied in humans with septic shock,” says McIntyre, who was intrigued by the potential of the therapy to help her patient population. McIntyre says she loves working with the multidisciplinary team.
Stewart thinks the abundance of colleagues and dynamic academic environment make Ontario a fantastic place to do research. Dr. Stewart’s experience in moving research forward has brought him many leadership roles. His days are busy and challenging, but his research keeps him motivated. “The thing that really determines when I go home at night, whether I feel I’ve had a great day or not is what happens in the lab or in our translational projects,” says Stewart. “Even a modest success is so exciting.”
**Photo: Dr. Duncan Stewart, courtesy of The Ottawa Hospital