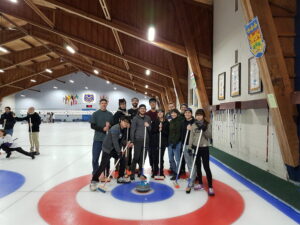 Neurological conditions afflict thousands of Canadians each year, and account for a high percentage of our direct and indirect healthcare costs and disability adjusted life years, to say nothing of their impact on quality of life. Very few of these conditions are curable, and most worsen over time. Dr. Bret Pearson, Senior Scientist of Developmental and Stem Cell Biology at SickKids in Toronto (pictured far left with members of his lab), hopes to someday improve that prognosis by understanding planarians’ remarkable ability to regrow most of their body following injury.

1. Tell us about the biggest questions your lab is trying to answer right now.

Dr. Pearson: At our core, we’re a stem cell biology lab with a focus on understanding how adult organisms can manage their stem cell population, which needs to stay stable throughout the entire life of the animal. Stem cells are only as good as the differentiated cells they make, and we want to know how they make the correct lineages during homeostasis or in response to neural injury, and how they adapt to remake complex tissues and structures.

Ultimately, we want to unravel the molecular mechanisms of neuroregeneration. We’re asking big, open questions that haven’t been widely studied among biology and stem cell researchers, and going where it leads us.

2. How are you using planarians (flatworms) to better understand neural regeneration?

Dr. Pearson: Achieving neural regeneration in the central nervous system requires both spatial repatterning the new brain, as well as a temporal patterning component to it – we presumably need to make the right cells at the right time in the right place, and then reconnect structures and tissues properly to restore function. We don’t really understand how that works, and it is challenging to study using most modelling systems. We can use some mouse models as well as nematodes (flatworms) like C. elegans to study certain aspects of axon regeneration, and that’s good because re-growing and reconnecting axons may be the most important aspect of treating things like spinal injury in humans. However, these models are poor models for cellular regeneration.

We study two aspects of neuro-regeneration: axon reconnection and cell replacement, the latter of which doesn’t get a lot of attention from the research community. Planarians are one of the best regenerating animals on the planet. The most dramatic example of this is, if you decapitate a planarian, it can regrow an entirely new head and brain, and reintegrate that structure to the rest of the body in about a week.  Very small pieces of them can completely regrow into a new animal in a few weeks. That ability is very compelling to those of us studying regeneration; they also share many genes with humans, as well as certain types of cells and tissues, which makes them a good model for studying regenerative biology.

3. How might understanding molecular mechanisms of neural regeneration affect the way we treat brain and spinal injuries in the future?

Dr. Pearson: When you work in basic biology, you’re often too deep in the forest to see where it’s all heading when applied to the clinic. Certainly, there is a lot of interest and some progress in how we might be able to get axons to reconnect. Mammals tend to have a fibrotic or scarring response to neural damage, and so we want to be able to minimize that and create a permissive environment for axons to grow in the wound, which may be accomplished using new therapeutic agents. Transplantable cellular therapies may one day be able to rebuild connections in the central nervous system, the cells of which may come from stem cells. Our work is more relevant to the latter – understanding stem cell driven mechanisms of neural cell regeneration.

4. How important is it for Ontario and Canada to support basic research, and what does it take to do it effectively?

Dr. Pearson: Ultimately, the molecular mechanisms for all of this remain unknown, and so we need to push forward on understanding the molecules and mechanisms involved. Primarily, we need trained people to do the work and the funding to support them – technology wise, there is nothing exotic about what we are doing. We are fortunate to receive support from the Natural Sciences and Engineering Research Council of Canada, who fund all of our research on neural regeneration, and Canadian Institutes of Health Research and the Ontario Institute for Cancer Research for funding our work on stem cell biology. However, most funding mechanisms focus on later-stage research and are looking for a “slam dunk” discovery, and don’t often allow researchers like me to follow our noses to see where it leads.

In terms of basic science, I think there has been a resurgence how people view its importance in the past few years, especially in light of COVID-19 and the mRNA vaccines, which really came from a Canadian stem cell biologist doing basic science. So, we’re back to the emphasis being learning about the basic mechanisms of cell biology after a period when a lot of experimental therapeutics were pushed forward perhaps faster than they should have been – when clinical trials fail, they ultimately fail because we don’t know enough about the basic, underlying mechanisms.