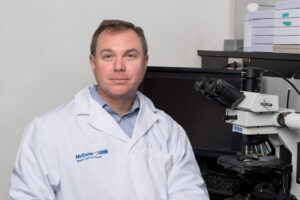 You’d be hard pressed to find a Canadian who hasn’t been affected by heart disease, either through first-hand experience or that of a loved one. More than two million of us have been diagnosed with ischemic heart disease (narrowing of the arteries), a leading cause of death worldwide and a major cause of myocardial infarction (MI; heart attack). Nearly 100,000 Canadians survive an MI each year; more than 40,000 do not.

Even with aggressive therapy immediately following a heart attack, however, some patients face a serious prognosis if the damage to the heart muscle is significant. The muscle is permanently replaced by scar tissue that can no longer contract, limiting the heart’s ability to effectively pump blood. Depending on the severity and location of the scar tissue, it can lead to heart failure. Heart failure treatments can only slow disease progression, not reverse it. The only way to restore lost function is to give the patient a new heart (cardiac transplantation) or to insert an artificial pump to mechanically assist circulation.

“Ultimately, what we hope to do is develop a treatment that involves mapping the heart, locating the scars and transplanting heart muscle cells (ventricular cardiomyocytes) derived from human pluripotent stem cells to ‘remuscularize’ the scarred areas of the heart and significantly restore function,” Dr. Laflamme says. “Ideally, this would be a minimally invasive procedure. We’ve made a lot of progress on overcoming preclinical hurdles as we work towards being able to conduct human trials, which we hope can happen in three years’ time – but there are still some challenges ahead.”

Last year, the team published results of proof-of-concept studies using embryonic stem cell-derived cardiomyocytes (hESC-CMs) in a preclinical pig model, which closely mirrors human physiology. Encouragingly, the researchers found that the hESC-CMs were able to electrically integrate with the rest of the heart and ‘fire’ in synchrony with it.

“We still have one significant hurdle to overcome, and that’s the problem of arrhythmias, or irregular heartbeats, for which we saw increased incidence for about three to four weeks following implantation of the hESC-CMs,” Dr. Laflamme explains. “That’s obviously problematic, since people who experience a heart attack are already at elevated risk for arrhythmias and we don’t want to elevate it further. Our focus now is to overcome that problem, so our approach is safe enough to conduct human trials.”

Bringing the experimental treatment into the world’s first human clinical trial and ultimately into the clinic will be the result of years of work by a small army of researchers and partnering organizations, including OIRM, the Stem Cell Network, the Centre for Commercialization of Regenerative Medicine and BlueRock Therapeutics. The latter is the result of a $225 million investment by Versant Ventures and Bayer AG (recently full acquired by the latter for $1 billion) to commercialize cell and gene therapies for applications in neurology, immunology and cardiology. OIRM-funded researcher Dr. Gordon Keller of the McEwen Centre for Regenerative Medicine, whose work is also instrumental for advancing the experimental MI treatment, is the company’s scientific co-founder; Dr. Laflamme serves as a founding investigator.

To date, this consortium has developed new electrical imaging techniques that, along with traditional electrocardiogram recording and catheter-based electrical measurements used in current clinical practice, will provide a clear picture of electrical activity in the recipient heart. They have also been successful at scaling up the capacity to reliably produce and mature enough hESC-CMs for transplantation – no small feat, since between one and two billion cells may be required for each treatment.

Dr. Laflamme notes that the progress to date amounts to an important success story for the Ontario regenerative medicine (RM) sector.

“Ontario punches way above its weight in terms of RM and commercializing cell therapies, and OIRM is a big part of that. The work we did with OIRM grants gave us the data that really turned heads among industry leaders and convinced them to make significant investments in the technology. Without that level of support, which is difficult to attract via most funding mechanisms, a lot of RM developments will not make it into the clinic where they can truly make a difference.”

Click here to read more about OIRM’s role in the ultimate creation of BlueRock Therapeutics.