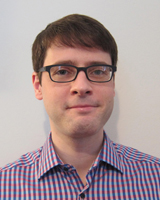 An initial interest in zoology and a love for animals inspired Dr. Phillip Karpowicz, an assistant professor at the University of Windsor, to seek out a career in science. Along the way, his path took a few unique turns. Starting out as a philosophy student, he landed in Dr. Derek Van der Kooy’s lab at the University of Toronto to study the ethics behind stem cell research, before quickly realizing he was much more interested in doing science than studying the philosophical issues behind it.

Karpowicz, who had been working with neural stem cells under Van der Kooy, made a slightly less jarring transition to a focus on the intestine a few years into his career. “The intestine is really interesting because it’s a tissue where the population of cells is changing all the time. It’s constantly renewing itself, so it’s really dynamic and the stem cells work really hard to keep it going,” he says. “The intestinal epithelial cells are the lining of the whole digestive track and it’s completely changed every five to seven days. None of the cells are really old there, they’re constantly dividing and dying off and being changed, so it’s a really active stem cell population.”

What he discovered is that intestines in mice, Drosophila (fruit flies) and humans are remarkably similar to one another and studying the cells of their intestines enables him to ask questions in different ways about the regenerative potential of the tissue. This work is advanced by organoid models, which allow Karpowicz to observe these tissues in 3-D to better study structure and function of the tissue, as well as their circadian rhythms.

It may seem like a far leap to go from the intestine to circadian rhythms, but that’s exactly where Karpowicz’s research has taken him. With support from an OIRM New Ideas grant, he is looking at how our internal clocks impact cell regeneration. “What we’re studying are the daily changes that are occurring in human tissues,” he says. “In particular, in the intestine there are constant daily changes called circadian rhythms that follow repetitive twenty-four-hour patterns of change. These cells contain a genetic clock that tells them the time of day and how to behave according to that time.”

He gives the example of how the majority of us sleep at night and are awake during the day. “What we’ve discovered is that cells like to divide at different times of the day and the time of division and regeneration of this tissue is probably in sync with other processes the intestine has to do, like eating and digesting food,” he says. “What we’re exploring is how those timings can be used to improve therapies. We also want to test whether we need to take these changes into account when we’re studying tissues in regenerative medicine. For example, if we are trying to make cells repair an area that’s been damaged or develop drugs that will be used to target those cells, how does the state of the cells alter the outcomes of the therapy.”

For a long time, research has been done on cell regeneration without consideration being made to the time of day—something Karpowicz thinks is an oversight. “People have been studying these things without thinking about the fact that if they looked at the cells at one time of the day verses another time of day they would actually be doing different things. Cells are not constant. They actually have a daily program in them that we really need to understand,” he explains.

This is also of particular interest when looking at things like the increased rate of certain diseases in shift workers and the potential to see these types of increases in those who travel frequently or must manage large shifts in time zones. “It’s a really major public health issue because people do all kinds of things that disrupt their circadian clocks,” he says, noting that even the tendency to change our sleep patterns on the weekend may be affecting cell behaviour in unforeseen ways.

Learn more about all of OIRM’s New Ideas grant awardees.