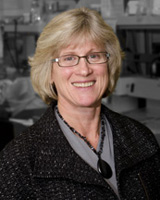 The major long-term objective of my research program is to elucidate molecular mechanisms that regulate the normal and neoplastic development of T and B lymphoid precursors from hematopoeitic stem cells (HSCs). Signaling through tyrosine kinase receptors such as Flt-3, IL-7R and c-Kit as well as Notch receptors plays important roles in the specification and commitment of precursor-B (pre-B) and precursor-T (pre-T) cells from HSCs. Fringe proteins are glycosyltransferases that modify the extracellular domain of Notch receptors, and in some contexts this alters their specificity for Delta-like vs Jagged type Notch ligands. Recently, our work has been focused on three broad goals: 1) To determine how Fringe proteins modify signaling through Notch receptors to control the cell fate choices of HSCs and progenitors, 2) To determine how aberrant signaling pathways and transcriptional networks promote the initiation and progression of acute lymphoblastic leukemia (ALL), and 3) to identify and functionally characterize the leukemic stem cells in ALL.  We have shown that Lunatic Fringe critically regulates T lineage specification from HSCs by enhancing the strength of Notch1 activation by Delta-like ligands. Although Manic Fringe is dispensable for this function, Lunatic and Manic Fringe co-operate to suppress HSC responsiveness to Jagged-1. Thus Fringe proteins ensure that HSCs adopt the T cell fate in response to Delta-like ligands but not Jagged ligands. My lab also aims to elucidate how normal developmental pathways become subverted during the initiation and progression of ALL in mouse models we have created or obtained. We are determining how gene expression profiles change as HSCs become progressively more restricted to erythromyeloid or lymphoid fates, and are defining which aspects of the normal programs are retained or lost in leukemic lymphoid and myeloid progenitors.  This approach has allowed us to identify several novel candidates as therapeutic targets for pre-B and pre-T-ALL, and has revealed important mechanistic connections between different developmental signaling pathways that become subverted during leukemogenesis.  Finally, we are using highly resolving 6-10 colour flow cytometry to purify ALL blasts expressing different subsets of cytokine receptors and maturation markers to identify fractions most highly enriched in leukemia stem cells.