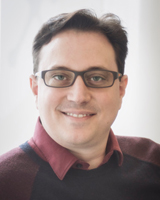 The brain harbors a self-contained immune system, finding its origins early in development. These resident immune cells, microglia, contribute to the development, maturation, homeostasis, and perhaps eventual demise of the nervous system. The laboratory for Synthetic Neuroimmunology aims to clarify, using humanized in vitro models, the role of these cells in health and disease. Mutations and polymorphisms affecting genes expressed solely in microglia are associated with conditions ranging from psychiatric disorders of developmental origin (e.g. Schizophrenia), to age-related neurological disorders (e.g. Alzheimer’s). Using primary benchmarks and single cell profiling, combined with tissue engineering, we aim to generate organotypic brain cultures, as a prerequisite for identification of disease-associated phenotypes. Functional variations affecting microglial homeostatic behavior and reactivity, at different stages of development and different ages, eventually lead to neuronal dysfunction, loss of connectivity, or death. We use the CRISPR/Cas9 toolkit to engineer disease-associated variants in pluripotent stem cells. Directed differentiation into cells of interest (neurons, glia) allows us to test the effects of these variants in monotypic cultures, and in co-cultures designed to replicate the 3D cortical architecture of the human brain. Glial cells such as microglia and astrocytes are capable of sensing and reacting to various stimuli, such as immune/inflammatory modulators. As such, they are uniquely suited to integrate peripheral inputs (pathogens, microbiota, cytokines), as well CNS-centric stimuli (synaptic plasticity, electrophysiological activity, metabolic demands, cell death) over time, ultimately affecting the health of our neural networks, for better or worse. While their roles in development are under evolutionary constrains, their actions in disease or during aging may be maladaptive. Our ultimate goal is to identify and control inflammatory processes that may precede, sometimes by decades, the largely irreversible degenerative processes seen in patients.