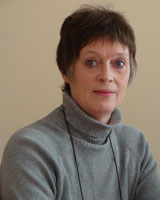 My research interests are focused on Epigenetic gene regulation. The project that exemplifies these interests deals with Genomic Imprinting in mice. Genomic Imprinting is a process of gene silencing that marks parental alleles according to the parent-of origin throughout the life of the organism. There is growing evidence that the mechanism by which genes become marked for silencing in this way is a maternal effect, and that among the primary targets are genes involved in placental development. My lab has recently discovered a paternally expressed, maternally silenced imprinted gene, Sfmbt2, which is a member of the Polycomb group (PcG) of gene silencers. Sfmbt2 is imprinted, and expressed robustly, in extraembryonic tissues, but is biallelic and weakly expressed in somatic tissues. We have also found that very rare parthenogenetic trophoblast stem cells, or PTS cells, have reactivated at least one of the maternal alleles of Sfmbt2. Given the role played by PcG genes in maintaining pluripotency in other stem cell types, one explanation for the rare derivation of PTS cells is the occasional reactivation of a maternal allele in parthenogenetic embryos. This would suggest that Sfmbt2 may play a significant role in either the establishment or maintenance of TS cells. Our future studies are aimed at testing this hypothesis. We anticipate that the analysis of Sfmbt2 and associated proteins may reveal important targets of gene silencing in extraembryonic lineages.

This work is very new, so there is at present only one publication, although at least two others are in preparation.